Come home to a bunch of balloons:

And two dozens of roses:

And a chocolate cake:

And then follow it with a luxury dinner at Restaurant Lof:

Jerusalem artichoke cream with kale and truffle as starter for me:

and Jan’s Cabbage and curry with poached quail eggs,black olives and peppers:

Dessert was Pear cake with mascarpone, coffee and dark chocolate for me:

And ‘Our’ tarte tatin with apple, vanilla ice cream, caramel and sugared pastry for Jan:

Followed by tea for me:

chosen from a fancy tea menu:

And coffee for Jan:

It was a lovely day!

After a month of working in safety boots, my feet needed some TLC. And Groupon came to the rescue with an offer for a fish spa & pedicure not to far from me. So I bought it, and booked it. And then one Monday it was time to go to my first ever fishy pedicure. And where was this? At Beauty Studio Fauvelle, (also on facebook), in Eeklo.

I was received with a smile by Chloe, the owner, and directed to a nice private room, with low light, a comfy  chair, and my personal tank full of hungry fishies. After cleaning my feet with a nice warm moist towel, I got to immerse them and say hello to the fishes, that then went happily about their business of nomming my toes, I mean, sucking the dry skin from my feet. They did a great job of it! I also got a free coffee to enjoy while those little friends did their work. 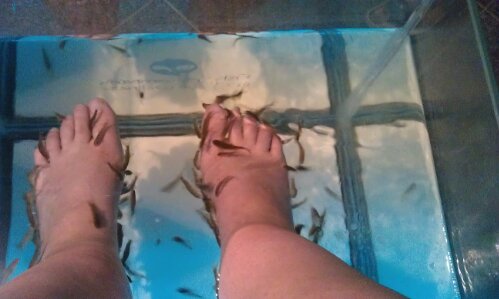 After 15 minutes of relaxing that passed rather fast, I slowly pulled my legs from the tank, and got them dry. We then went to another room, where the rest of my pedicure took place: filing whatever was left of dry skin, trimming & filing nails, nail polish and a nice foot massage with cream.

You can also can enjoy this, for the reasonable price of 40€ (35€ for fish spa and pedicure, 5€ for the nail polish). And she also has a fish spa for two, so you can go with your best friend!

And all I can think of is pumpkin. Ok, not really, but there was some in my mind. So I bought one, and made a risotto and a soup with it. Recipes have been requested, and here they are. 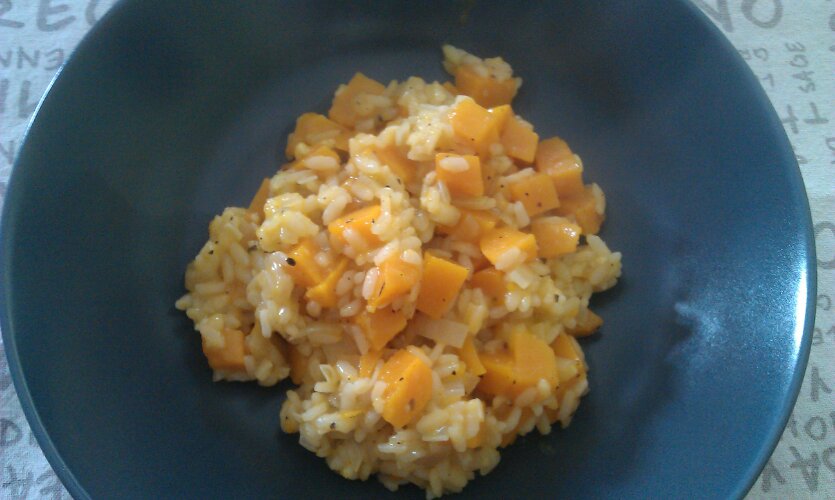 And the second recipe is

(no picture of this, sorry, just imagine a bowl full of pumpkin orange soup!)

We had a big BBQ to attend this weekend, and I wanted to take some sangria along so they’d try proper sangria (instead of the bottled stuff they sell here). So I asked my best friend for her recipe, and she obliged. I’m sure she won’t mind I spread the taste of great sangria with the rest of the world. So, recipe for all of you!

So what does one eat when it’s too warm to cook? Something that requires little to no cooking. Today that was a pasta salad. 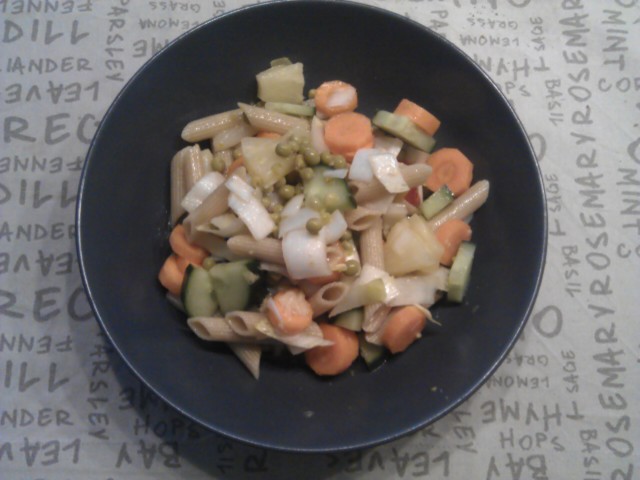 Note: you could serve this as a side, adding some protein like an omelette, a (veggie) burger, piece of grilled fish or meat for those not vegetarian.

So today’s Jan birthday (Happy Birthday!), and we (because he helped) made a no bake cheesecake to celebrate. No bake because it’s too warm to cook anything lately.

Recipe: No Bake Lemon Cheesecake with Speculoos Base

Serves: 8-12 depending on appetite

Our last day in Copenhagen and the day we came back to Belgium. We started the day with the usual breakfast in the hotel, then repacking everything to check out of our hotel. We left the suitcase at the hotel, since the flight was at 7pm, and went off to the center to do some stuff.

First stop: the kiosk at Fisketorvet to buy a klipcard to go to the center. We took the bus to the center, where we walked about a bit. We passed by Hvidberg stoffer, one of the oldest, if not the oldest, fabric stores in CPH. The carry all sort of fabrics and also have tailoring service for what I saw. Sadly I didn’t get any souvenirs since the cheapest I saw was way out of my range at 160DKK (plust 25% tax) per meter. It’s also a store where you need to know what you want, because browsing will make you dizzy. Afterwards we stopped by Sommerfuglen again to confirm that I had bought a 50gr skein and not find a second one so 50gr will have to do.

We then strolled to Magasin du Nord for a lookey for food, we also passed by the Holm’s Coffee next door but they don’t have any veggie sandwich, so we ended going to Baresso Coffee, to have a panini and a piece of (no bake) cheese cake for lunch.

Since we had bought a klip card and wanted to make the most out of it, we decided to take the Boat Bus (yes, CPH has two regular bus lines that are boats!) back to Fisketorvet to kill some time before heading to the airport. We had a peek at Bog og ide, a store that sells paperwares, books, and other school / office stuff, plus some gifts, and by Zizzi, a plus sized clothing store that has “We looove curves” as a motto. We stopped by Joe & the Juice (warning: music playing site) for a juice (instead of a cup of Joe). Finally we had a look at Bahne, a house wares store, where I got a souvenir for the kitchen – a spoon to rest a stirring spoon (makes sense, no?). We then went to pick up our stuff from the hotel, and to begin our trip back home.

First a S-train from Dybbølsbro st. to Københavns Hovedbanegård (aka Central station). Then the ø- train to the airport. We were early there so after dropping off our luggage and passing security, we roamed the stores for a while. We ended having a coffee and sharing a chocolate chip cookie at Caffe Ritazza, and looking for a vegetarian sandwich for about 20 minutes. We ended buying them in Starbucks, how sad is that? With our sandwiches ready, we headed for our gate, that was about 10 minutes walk away. Although apparently 10 minutes in CPH airport are more like 2. We did get stopped to fill in a questionnaire about the airport. We got to our gate and waited for our flight. A short flight later (1.5h is short!) we landed in Brussels, picked up our luggage and headed for the train station. And then we took the slow ass train for Ghent. And we decided to try and take a different one in Brussels North, but it didn’t stop in Ghent, so we ended in yet another train. And we got to Ghent on time to take the last bus to take us home!

And so concludes our vacation.

8th July – The plans that weren’t

Initially, as in, before we landed in CPH, we had decided to put Sunday (the 8th) aside to visit Malmö, and Saturday (7th July) to visit Elsinor. But since we had already visted Malmö, we decided to move the visit to Elsinor to Sunday. So the second plan was to go to the center to buy a CPH card for a day (free transport to Elsinor & all the visits included is worth it), and then take the train there. However Jan woke up with a very painful leg that made walking a lot nearly impossible. So I convinced him to take the tablet and park himself at the Nationalmuseet cafe with a cup of coffee (or two) and their free WiFi while I visited the rest of the museum. This time I took the camera along so I could take pictures (for free!).

My first stop was on the first floor (second for the Americans) that contains the exhibition on the Danish Middle Ages and Renaissance (1050 – 1660 AD), and the Prince’s Palace with interiors from the 18th century and the History of the Museum. I then climbed to the third floor to see the Near Eastern and Classical Antiquities exhibition, and on my way down I stopped at the second floor for the Stories of Denmark exhibition (1660 – 2000 AD) and the Doll Houses rooms.

After the lengthy visit, we went to Foodish (no website found) for lunch. They sell sandwiches and salads, and our sandwiches were delicious! We then stopped by Illum to explore the make up section (sometimes I do like to indulge in a new nail polish, but I didn’t find anything I liked this time). Afterwards we went to Holm’s Cafe for a juice and to plan the next move. We decided to visit some churches and then take the boat bus back to our hotel, but it didn’t really work.

We walked by, but did not climb, the Rundetaarn (Round tower),  on our way to St. Petri Kirke, which was closed. We then walked to Helligåndskirken, which seems to host a book sale but not be open to visitors. On our way to Nikolaj, we realized that we had already walked by the day before and noticed that it’s now a cafe (and a Contemporary Art Center). We followed our planned route to Holmens Kirke, that was closed as well. Luckily we saw that Slotskirken (The Palace Chapel) was open and we could visit.

After sitting for a few minutes in Slotskirken (and taking pictures, obviously), we walked towards the Royal Library, also known as the Black Diamond due to its polished black granite cladding. The library was obviously closed since it was Sunday. We wanted to take the boat-bus that stops next to the library but we were out of trips on our clipcard, and also 4DKK short in cash for the trip :( So we ended walking back to the hotel along the canal side, with frequent stops since my feet were killing me.

When we arrived at our hotel, we unloaded weight and went to the Bar to enjoy a Pineapple  Sunset (alcohol free) cocktail while relaxing on the terrace that overlooks the Copencabana canal swimming pool. A while later we went to the 5th floor to visit the sauna and the steam bath to relax. After a nice shower, we went back to Fisketorvet to have dinner. After exploring the possibilities, we decided on a Mexican restaurant called Indiana that had a reasonable amount of veggie options. And soon it was sleep time. The following day was the last day in CPH.