And here’s to many more 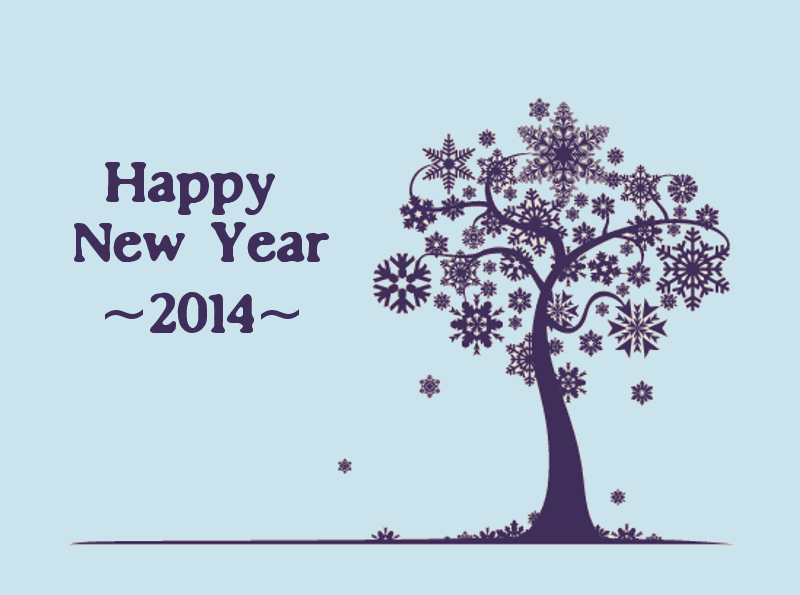 Lately I’ve been in a rut when it comes to cooking. It didn’t help that for two weeks it was too warm to consider turning the stove on (less so the oven), so we ate mostly salads. And then I had to start studying for (second chance) finals. And I was tired, and fed up, and didn’t have any imagination whatsoever to think up new exciting recipes. Or to look through my cookbooks to plan something different.

But today I felt like something different. Jan had been asking we had pitas (which translates into pita bread pockets filled with vegetarian gyros and vegetables / salad). To make it a big different, we decided to make coleslaw instead of the usual salad. And since we like to live on the edge, we made a nice spicy coleslaw. Here is the recipe so you can enjoy it too. 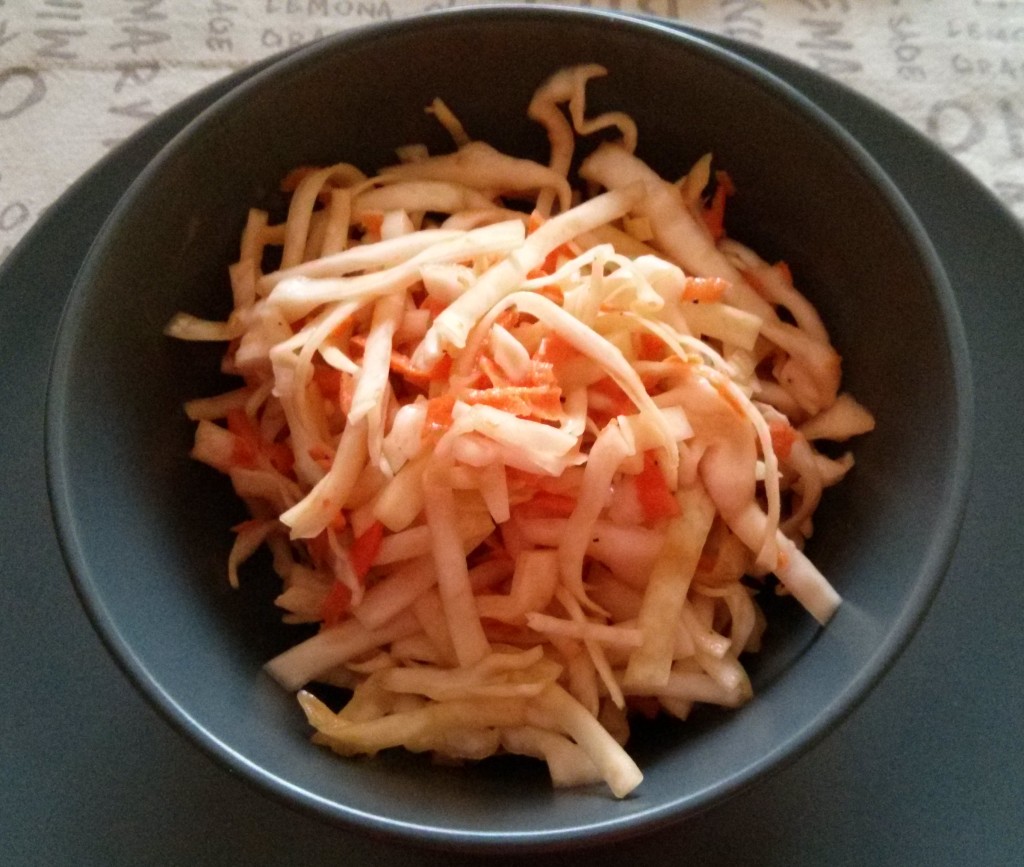 It’s that time of the year again, when Jan celebrates his 18th birthday! This year it was really warm the days before, so neither of us felt like me turning on the oven to bake something. Luckily the supermarket publicity came to the rescue with a nice summery recipe that required no oven! It did require some stove top time, but not too much. And so, the strawberry tiramisu became this year’s birthday dessert. 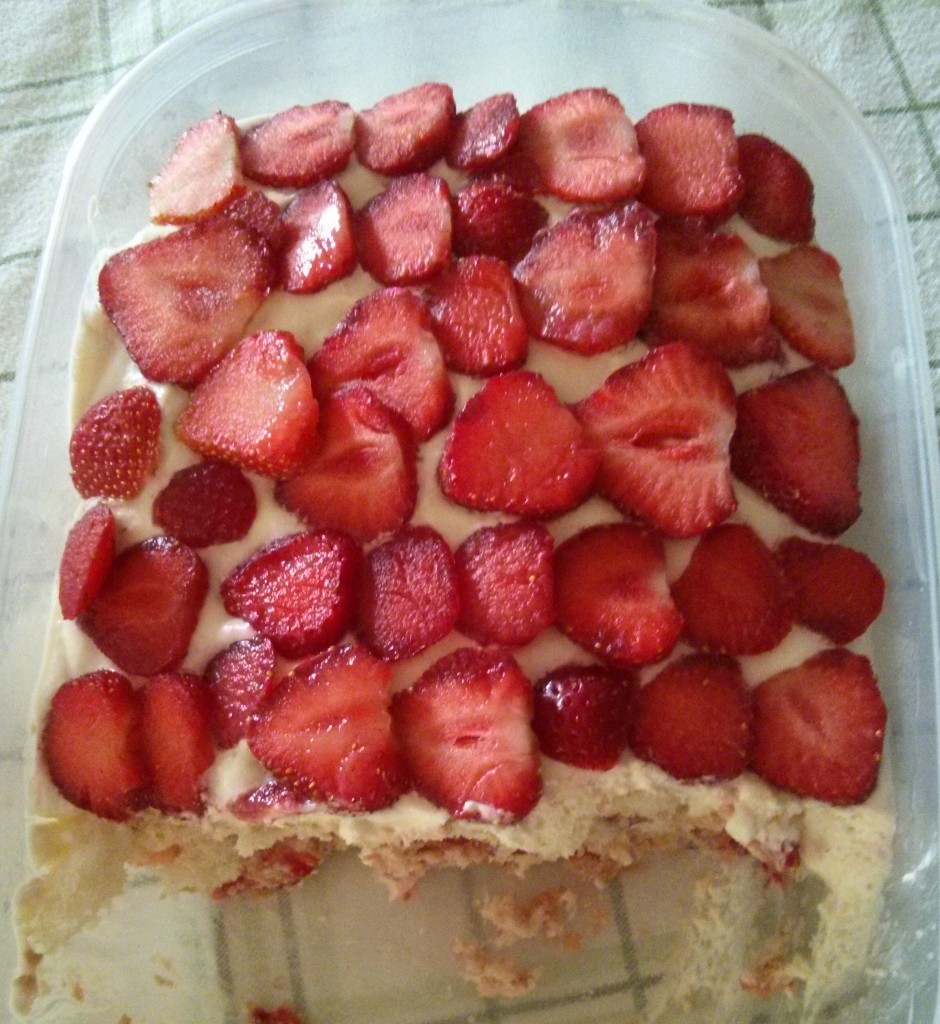 
Makes: 6 servings according to the original recipe, but make that more like 12-14 servings. 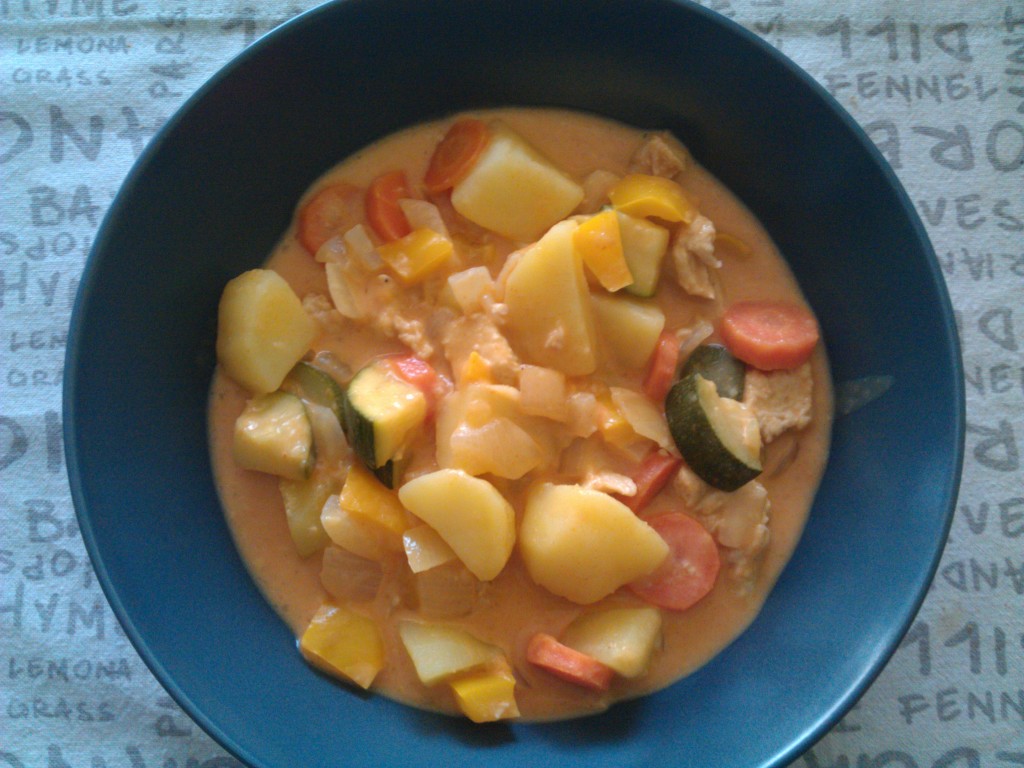 Sometimes I miss eating a burger. Not the (meat) flavour, but the possibility of just going out and grabbing a burger. It’s hard to find a good vegetarian burger! So what’s one to do? Make your own (deluxe, according to Jan) burger at home. 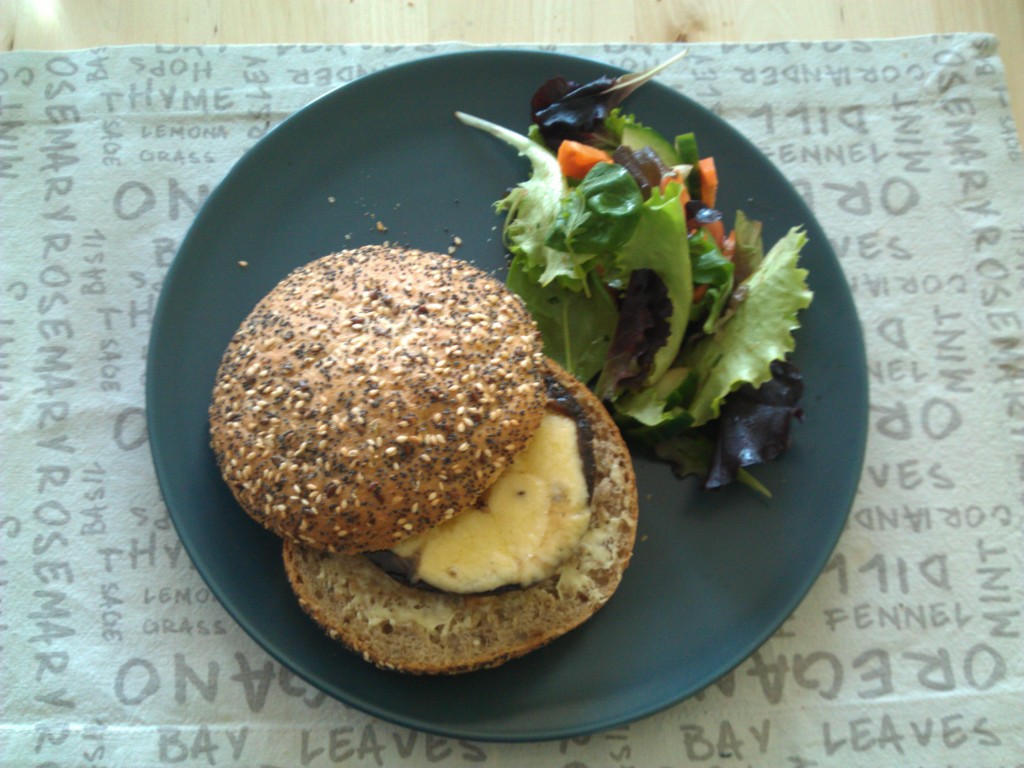 
Here I’m really only telling you how to make the portobello burgers. I like to eat a nice salad with my burgers. Today’s was young leaves, carrot, cherry tomatoes, cucumber,  and a olive oil, balsamic vinegar & salt dressing. Salad is pretty much a pick your own adventure sort of thing, so get creative with it!

If you can’t find big (and by big I mean 12-15 cm in diameter) portobello mushrooms, you can also use the smaller ones. Just make more per person and balance them on the bread bun.

Nutritional info is very dependent on what bread you use, how big your mushrooms are, how much mustard, ketchup and mayonnaise you use, etc. We had a burger each with a nice side salad for 485 calories.

It’s recipe time again. And in the oven before it becomes way too warm to want to use it. This quiche is crustless because I didn’t feel like making a crust (and to keep the calories low!). 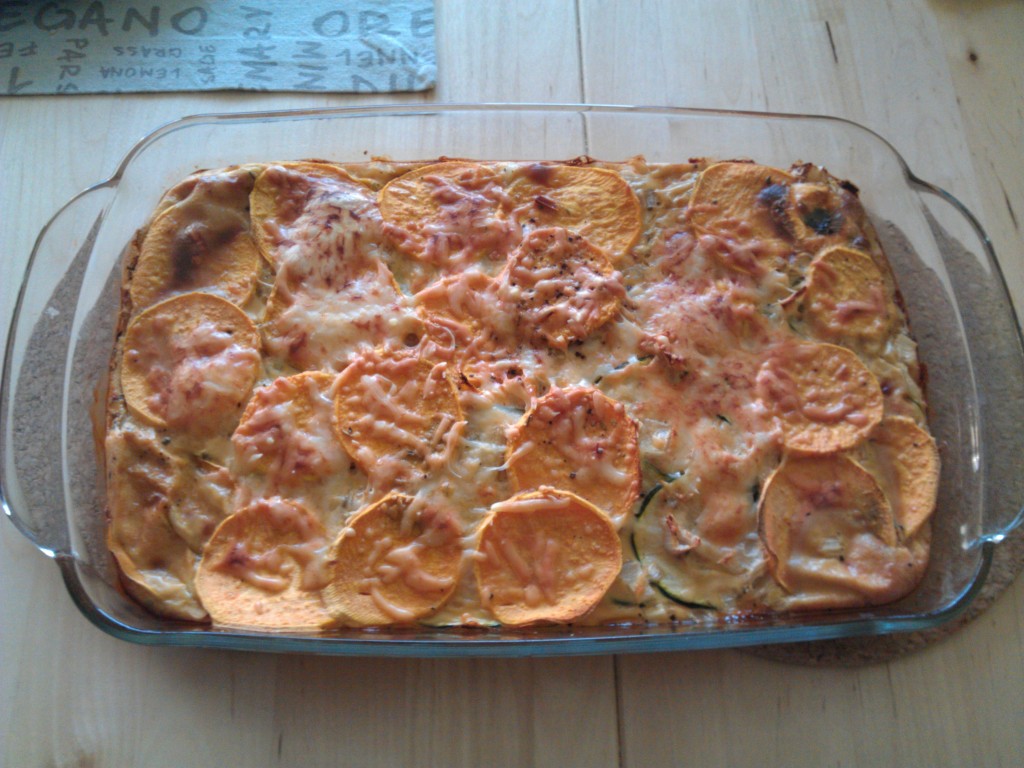 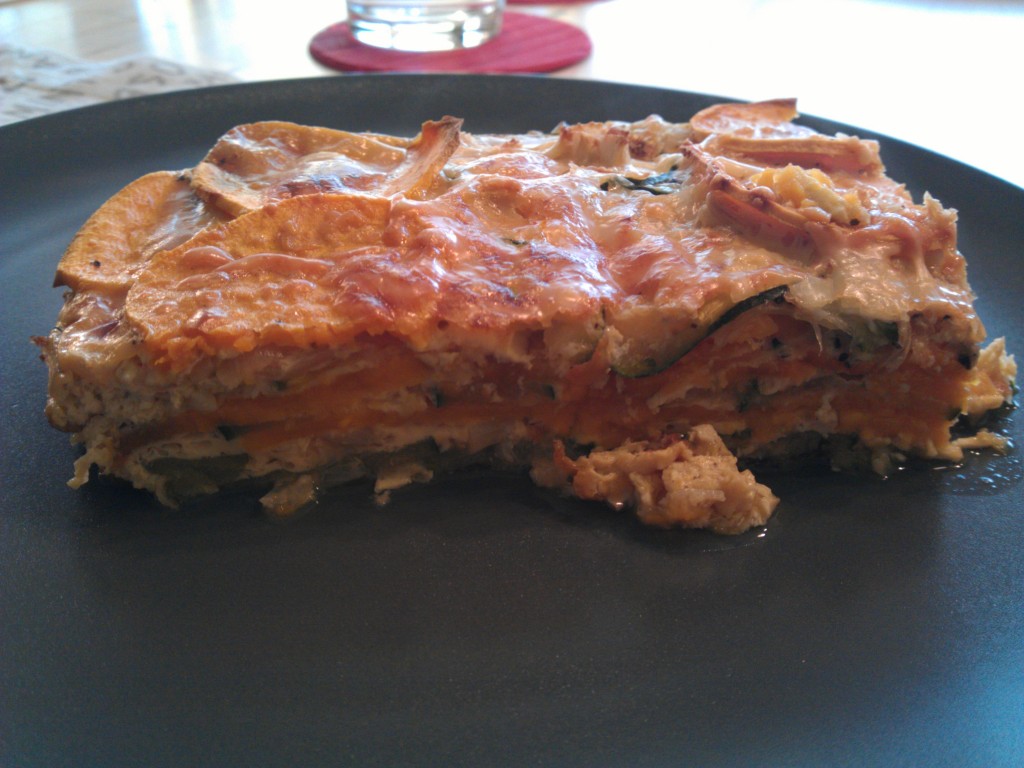 Bonus picture of the quiche once served 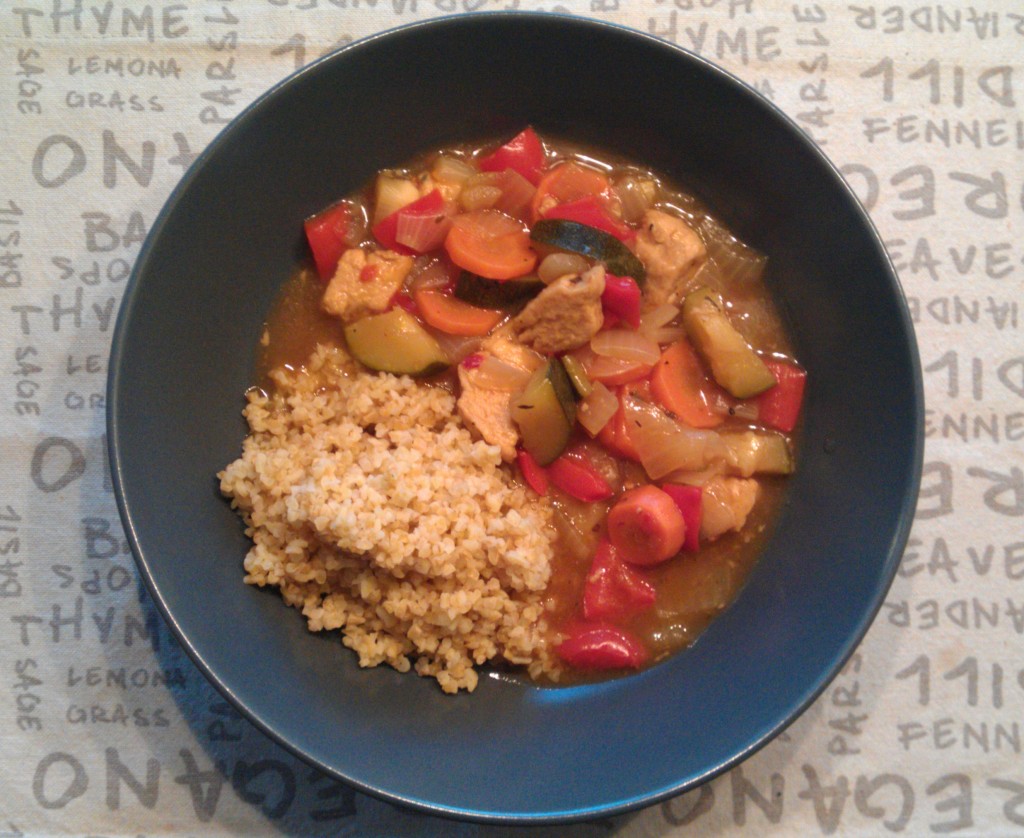 Sweet, and savoury, and spicy!

I wasn’t feeling like doing much prep work for dinner, so we got some chopped “wokmix” from the supermarket, a block of tofu, and with some rice, peanut sauce (jarred) and spicy peppers, it turned out to be dinner. 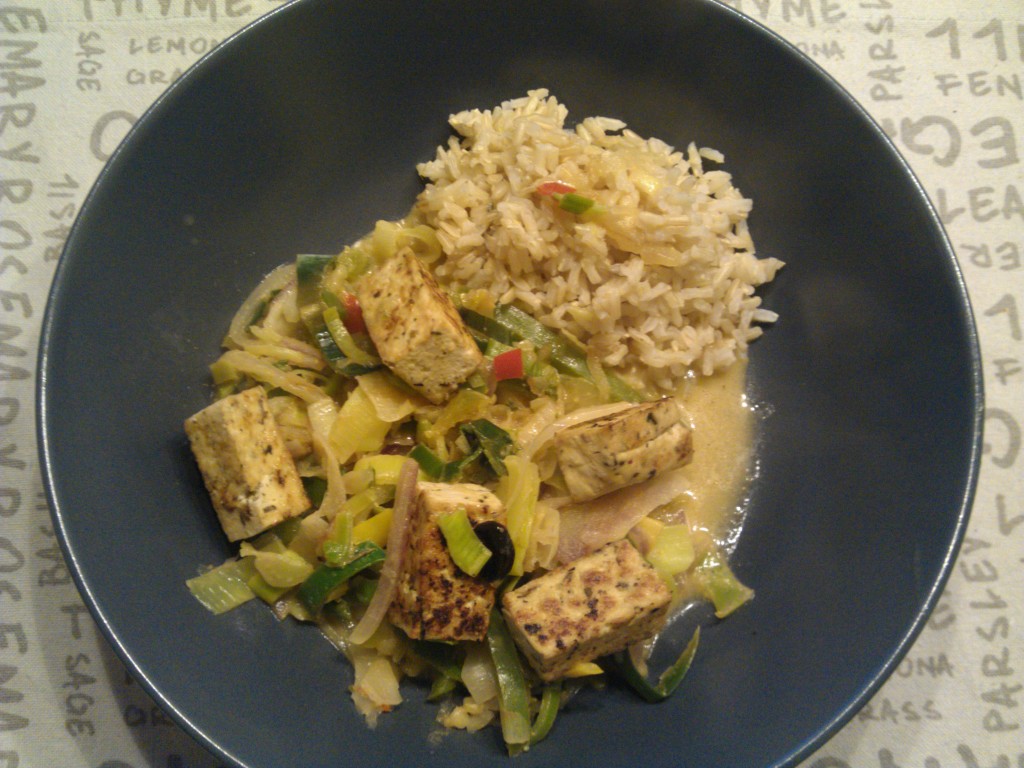 Borlotti beans are a pretty speckled bean when dry, but sadly lose their colors when cooked. Taste wise, they don’t differ much from any other beans, so feel free to use whatever you have in the pantry for this recipe.

I added quorn because I wanted to have a protein laden dish. Other options would be minced seitan, tofu, or tvp. Or skip it altogether! 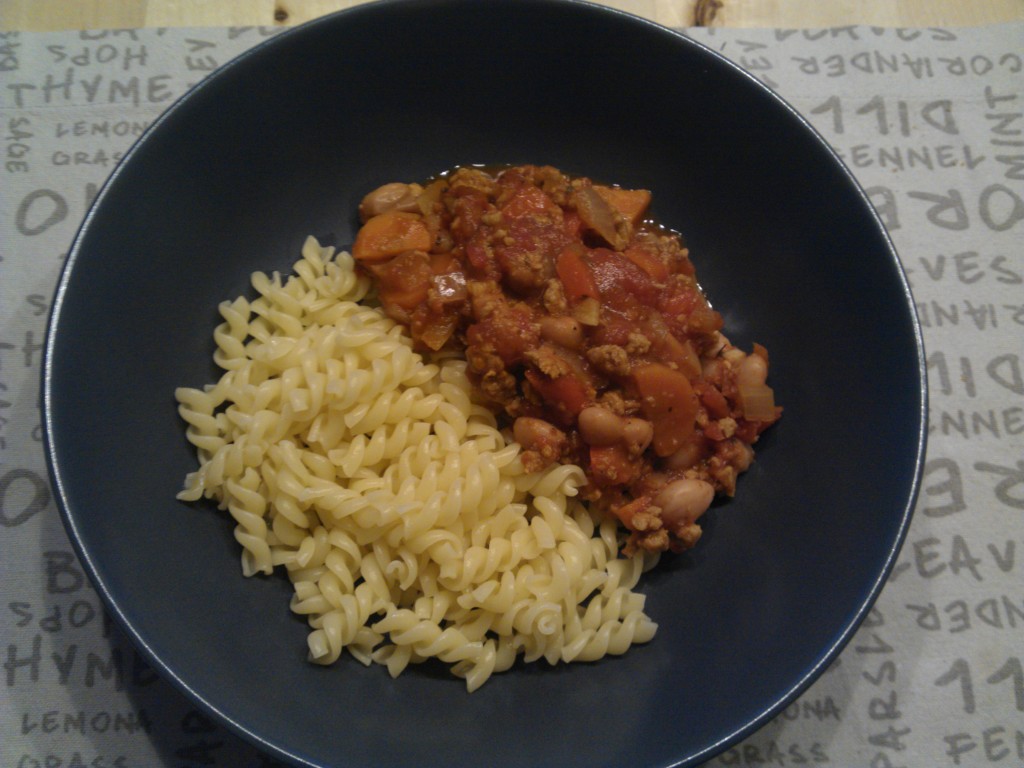 Mushrooms. Portobello ones. These are basically the same as your tiny white button mushooms, but brown and mature. The texture is denser, more satisfying to bite into. They make great burgers (on a grill pan or the bbq), or stuffed mushrooms in the oven. Today, though, they give their taste to a risotto.

Let’s be honest, whenever someone says that risotto is hard and you have to slave for hours above the stove stirring constantly, I think they’re crazy. Yes, you do have to stir it to get that creamy al dente rice texture, but not constantly. And it doesn’t take that long either, unless thirty minutes feels like an eternity to you. So, dare make risotto. Go on, you know you wan to.

And for the purists, I know this is not 100% traditional, but then, I am not Italian either. It’s creamy rice, with lots of mushrooms, and it’s tasty. 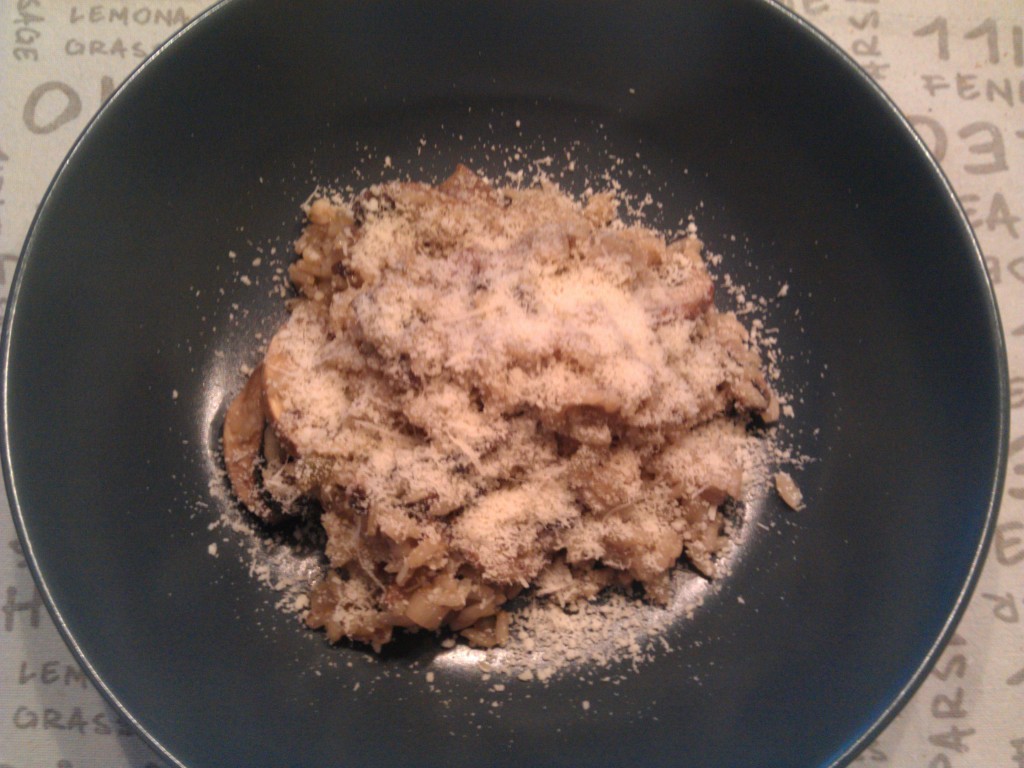